Introduction to the City of Kingsburg

The Charter City of Kingsburg is rather unique compared to other communities in California’s Central Valley. The town of approximately 12,000 persons, located about 24 miles south of Fresno, shares with its neighboring towns an economic base of agriculture, including grapes, almonds, peaches, raisins and berries.  What distinguishes it from others, however, is its Swedish heritage.  It was settled in 1873 by a group of Swedish natives at a flag stop on the Central Pacific Railroad.  The village grew to become a prosperous little farming town, but always retained its unique identification; in 1921, with 94% of its population of Swedish heritage, it became known as “Little Sweden.”

Despite population growth and demographic shifts (see Figure 2-4); Kingsburg retains its unique Swedish character. City leaders have used it to advantage to attract visitors and to add tourism to its economic base.  The Downtown is now marketed as “Swedish Village” to drivers passing by on busy Highway 99.  It has a quintessential main street corridor, Draper Street, with commercial buildings dating back to the 1900s.  Design guidelines require a “Swedish architectural style,” and a Form Based Zoning Code encourages building forms and site plans which promote pedestrian activity.  All of the very wide Downtown streets, including Draper, have diagonal parking; bulb-outs at intersections have attractive, well-maintained landscaping. The nearby Historic Kingsburg Train Depot has undergone a complete renovation, and an affordable multifamily senior housing project has recently opened just a block off of Draper Street.

On October 15, 2016, an early morning fire destroyed the historic Stone Hotel building on Draper at the western entrance to Downtown. Although the building’s upper floors of hotel rooms had been unused for many years, the ground floor uses, including a popular coffee shop, had added vibrant life to Downtown. 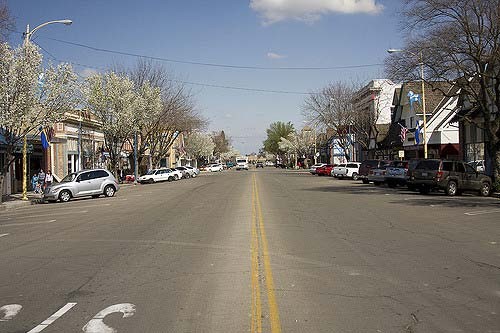 The loss of one of Downtown’s iconic buildings was felt as a devastating blow by community leaders and Downtown merchants, who finally accepted the fact that the Downtown has been in decline for many years.  Most of the Swedish specialty shops and restaurants have gradually left the main street.  Former small retail businesses have closed, and have been replaced by office uses or have remained vacant; one major storefront has been held vacant for nearly 25 years.  Except for restaurants, most businesses in downtown are now closed on evenings and on Saturdays and Sundays.

Community leaders realized that downtown Kingsburg needed help.  At first they turned to the Small Business Revolution, a reality television show which promised to provide $500,000 to assist small downtown businesses in the town it selected as the focus for its second TV season. The show narrowed down its initial 14,000 applicants to five, including Kingsburg. Unfortunately, Kingsburg did not make the final cut.

The City then turned to the Community Planning Assistance Team (CPAT) program, recently created by the California Chapter of the American Planning Association (APA) to provide pro bono planning assistance to financially constrained California communities. Kingsburg filed an application with APA on January 22, 2017, requesting advice and assistance on revitalizing its downtown and updating its way finding (signage) program. On February 9, 2017, Kingsburg received notification that its application had been accepted, and the City and CPAT leadership began scheduling the project. It was agreed that a team of planning professionals would visit Kingsburg for four days and three nights on April 27 through April 30 to work with the community on a revitalization strategy for Downtown.

The Community Planning Assistance Team assembled by APA to assist Kingsburg consisted of six experienced professionals: Team leader Robert Paternoster, FAICP, is a retired planning manager, having served as planning director for the cities of Pittsburgh, PA, Long Beach and Sunnyvale, CA; Michael Dozier served as Economic Development Director for the City of Clovis and recently served in the same position for Fresno State; Tom Ford, AICP, is an urban designer with the M-Group in Hayward; Stanley Hoffman, FAICP, is the president of the urban economics consulting firm of Stanley R. Hoffman Associates in Los Angeles; Emily Morishita is a senior designer with the way-finding consulting firm of Hunt Design in Pasadena; and, Cynthia de la Torre is an assistant planner and zoning specialist for the City of Beverly Hills (for more biographic details, see Appendix B: Meet the Team).

The Team arrived in Kingsburg on Thursday afternoon, April 27, a beautiful sunny and comfortably cool Central Valley day. They were greeted at lunch by a welcoming committee which included Mayor Michelle Roman, City Manager Alexander Henderson, and Economic Development Advisor Jolene Polyack, as well as selected leaders from the business community. Following lunch they were led on a walking tour of downtown, highlighted by a reenactment of a 1920’s train departure at the restored Historic Kingsburg Train Depot. They then hopped on a bus to tour the remainder of Kingsburg, its surrounding farms, and the nearby City of Selma.

With the quick physical reconnaissance completed, the Team conducted a major community meeting in the evening to obtain input on community values and aspirations. The scores of residents and business owners who attended the meeting responded actively and enthusiastically to the SWOT (Strengths-Weaknesses-Opportunities-Threats) analysis led by the Team. Table1-1 summarizes the results of the SWOT analysis, with priorities indicated by the numbers recording the community vote for each issue.

Go here for the full report in PDF format.